“Although the world has changed, the laws of God remain constant. They have not changed; they will not change. The Ten Commandments are just that—commandments. They are not suggestions. They are every bit as requisite today as they were when God gave them to the children of Israel. If we but listen, we hear the echo of God’s voice, speaking to us here and now. …“Our code of conduct is definitive; it is not negotiable. It is found not only in the Ten Commandments but also in the Sermon on the Mount, given to us by the Savior when He walked upon the earth. It is found throughout His teachings. It is found in the words of modern revelation.“Our Father in Heaven is the same yesterday, today, and forever. The prophet Mormon tells us that God is ‘unchangeable from all eternity to all eternity’ [Moroni 8:18]. In this world where nearly everything seems to be changing, His constancy is something on which we can rely, an anchor to which we can hold fast and be safe, lest we be swept away into uncharted waters.”
Posted by Delirious at 1:18 AM No comments:

Thought For the Day: Perfection 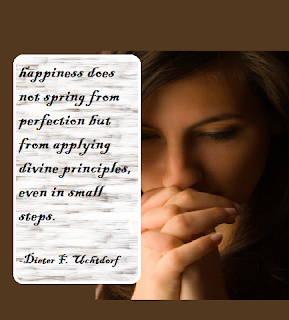 Posted by Delirious at 2:40 PM No comments:

This particular scripture was written about 74 years before the birth of the Savior: 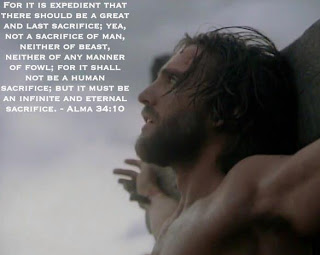 Posted by Delirious at 2:15 PM No comments:

Thought For the Day Lorenzo Snow

"Every man has got to learn to stand upon his own knowledge; he cannot depend upon his neighbor; every man must be independent; he must depend upon his God for himself entirely. It depends upon himself to see if he will stem the tide of trouble and overcome the impediments that are strewn in the pathway of life to prevent his progress. A man can get information by the operations of the Holy Spirit, and he approaches to God and increases in his faith in proportion as he is diligent."  Deseret News, Apr. 11, 1888, 200
Posted by Delirious at 5:50 AM No comments:

The LDS Church in China

The government of China will tell you that their citizens have freedom of religion.  Even some of the citizens will tell you this.  Actually, they do have some freedom of religion, but it isn’t total freedom.  Only some churches are “state approved”, and therefore allowed to function freely.  To be allowed full freedom, a church would need to agree to allow more government control in the church leadership.    The Chinese government is concerned that church groups might use their meetings to discuss political matters, and possibly even revolt.  They are concerned about indoctrination of their citizens by any foreign group.  This is why the government of China also strictly controls internet usage.  Recently we have seen how social media like facebook could play an important part in uprisings in a country (such as was the case in Egypt).  In a country that has seen many emperors be overthrown, the Chinese government want to keep on top of any groups that might pose a political threat, including religious ones.  So yes, China is allowed some religious freedom, so long as it doesn’t pose a political threat.

According to my understanding, the Catholic church is allowed to function in some locations in China.  I also have heard that the government had some choice in the choosing of those who would be the church leaders here.  I have also heard that there is another Christian church that is allowed to function in China, but I’m not sure of the name of it.  When I visited the Yellow Crane tower in Wuhan, and climbed up to the top floor, I could see a church steeple with a cross not far away.  But in general, the Chinese have been taught that religion isn’t necessary, and that it is kind of an emotional “crutch”.  Most Chinese don’t feel a need to join a religion.  But for those who do, they have these two Christian church choices.  There is also a resurgence of the Buddheist religion here in China.  We visited a buddheist temple in XiAn that is quite new, and probably cost a great deal to build.  We also visited one that survived the cultural revolution.  I have also seen buddheist shrines in some businesses.  So some religions do exist in China.

Our church has been given permission to hold meetings for foreign passport holders.  In the past couple of years, we have also been given permission to hold meetings for Chinese members, but these meetings must be separate from those attended by foreigners. According to my understanding, Chinese citizens aren’t allowed to be baptized in China.  But some Chinese nationals join a church while studying abroad.  Those who join our church are allowed to meet with other Chinese members, but not with the foreigners.   Members who meet in the same building as Chinese citizens are asked to not even speak to the Chinese members as they pass in the hall.  This is in accordance with the desires of the Chinese government.

Each week in our church services, our leaders read a statement issued by our church to members here.  This statement reminds us that we are not allowed to proselyte in this country.  We are asked to even avoid “passive proselyting”.  In addition, we are reminded that only foreign passport holders are allowed to attend our meetings and activities.  This is the agreement we have with the Chinese government, and an infraction of this agreement could jeopardize the relationship we have worked so hard to develop.  It could jeopardize the ability of the Chinese members to meet amongst themselves.  It could jeopardize any further advancements in our receiving acceptance as a state approved religion in the future.

Missionaries of our church are not allowed in China.  There are some members who offer service to the country, such as teaching English, but this is not missionary work.  Recently, the president of our church issued a statement that the age for young men to apply for mission had been changed from 19 years old to 18.  In addition, the age for young women had been changed from 21 to 18.  As soon as this announcement was made, there was some speculation among church members that perhaps China was opening its’ doors, and that this great influx of new missionaries were to be sent first to Taiwan, and then to mainland China.  This morning in church, our church leader told us that this rumor is not true, and that such rumors could jeopardize our position here in China.  As one church leader said, “We do not go in through the back door.  We go in through the front door, only after being invited. “ There will be no secret proselyting by our missionaries or members.

In a religion that highly stresses missionary work, this mandate is very difficult for our church members to endure.  In the Bible we are taught that we must go in to all the world and teach the gospel to every creature.  But presently this is not allowed in China.

Just recently, a young girl came to my home and told me she is a Christian.  She had met another church member, and he had mentioned that we foreigners hold church meetings together.  She hoped that she could attend our meetings.  I had to tell her that we have an agreement with the government of China that only foreigners will attend our meetings.   Since then, she has come to our home to visit.  This is allowed, as long as we do not proselyte.  Mainly she wants to practice her English, but she is a devout Christian.  For those who might feel that the “ends justify the means”, and that secretly preaching our religion wouldn’t do any harm, I would say that “secret” missionary work in China only hinders the future of our position here.  We need to just have faith and know that God knows these people, and will help and bless them according to His time schedule.
Meanwhile, I feel that we need not worry about the salvation of the Chinese people.  Unlike other religions, that believe that those who aren’t baptized in this life are damned to hell, and that little children who died before baptism are doomed to spend eternity in limbo, we believe in baptism for the dead, and that those who die without the chance of baptism will be given that opportunity through the proxy baptisms done in sacred holy temples.  God knows these people.  He sees their goodness.  He sees their faith.  They will receive all the blessings they deserve, according to God’s timetable; if not in this lifetime, then in the next
Posted by Delirious at 3:49 AM No comments: