Why the Book of Mormon? 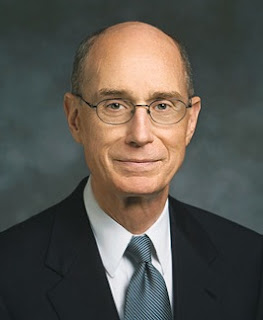 By President Henry B. Eyring May 2008 New Era

Why the Book of Mormon?

When I was a young man I wondered why the Lord needed to have the Prophet Joseph Smith translate the Book of Mormon to begin the Restoration of the gospel of Jesus Christ. I knew that God the Father and Jesus Christ had spoken with him. I knew that Peter, James, and John had restored the Melchizedek Priesthood, that prophets had brought the keys, and that Joseph had been taught by apostles and prophets from earlier dispensations. With all of that, I wondered what the place of the coming forth of the Book of Mormon in all of that was.

It Is a Powerful Missionary Tool

Then I began missionary work. One of my early companions told me the story of his conversion. I remember his words, which were something like this: “The missionaries had taught me. I had read the Book of Mormon. The missionaries challenged me to set a date for baptism, but I could not decide. Finally, I knew I had to make a choice. So, I knelt down and prayed to know if the Book of Mormon was true. I told God that I was desperate, that I knew this was the most important decision I had ever made, and that I needed His help. The Spirit testified to me that the Book of Mormon was true, that Joseph Smith was a prophet, that the Church was true, and so I was baptized.”

It Testifies of Christ

There are thousands of references to the Savior in the Book of Mormon. The testimony of Jesus permeates every page. So, whoever reads it is reading words which testify of the Savior.

It Brings the Spirit

Here is one passage from the Book of Mormon which conveys that we value this message beyond anything else we have or could have:

Each of us feels something a little different as we hear those words because we have different infirmities and different experiences for which the Lord gives us succor. The Book of Mormon is filled with references to the kindness of the Savior and has great power to allow the Holy Ghost to give us assurance that the Lord is reaching out to all of us. Everyone knows they will someday need such comfort. The Book of Mormon gives that assurance over and over again.

It Teaches and Invites

The Book of Mormon is both clear in doctrine and full of invitation to come to the Savior. The best way to answer concerns is always simple declaration of the truth, combined with warm invitation. The Prophet Joseph Smith described the Book of Mormon as being that sort of book. He said, “I told the brethren that the Book of Mormon was the most correct of any book on earth, and the keystone of our religion, and a man would get nearer to God by abiding by its precepts, than by any other book” (History of the church 4:461; quoted in the Introduction to the Book of Mormon).

When missionaries teach people about the Book of Mormon, they make the promise that Moroni makes:

“And when ye shall receive these things, I would exhort you that ye would ask God, the Eternal Father, in the name of Christ, if these things are not true; and if ye shall ask with a sincere heart, with real intent, having faith in Christ, he will manifest the truth of it unto you, by the power of the Holy Ghost.

We can also promise that reading the Book of Mormon will bring power to resist temptation or produce feelings of love within our families. President Benson said it this way, and the promise is sure: “There is a power in the book which will begin to flow into your lives the moment you begin a serious study of the book. You will find greater power to resist temptation. You will find the power to avoid deception. You will find the power to stay on the strait and narrow path. The scriptures are called ‘the words of life’ (see D&C 84:85), and nowhere is that more true than it is of the Book of Mormon. When you begin to hunger and thirst after those words, you will find life in greater and greater abundance. These promises—increased love and harmony in the home, greater respect between parent and child, increased spirituality and righteousness—these are not idle promises, but exactly what the Prophet Joseph Smith meant when he said the Book of Mormon will help us draw nearer to God” (The Teachings of Ezra Taft Benson, 54).

All good people long for those promises. Let us testify to them that the realization of those promises is possible for them. The book is about covenants which will lead them toward the happiness they so much desire.

Conversion depends upon our feeling the Spirit. The words of the Book of Mormon invite the Holy Ghost. There is great converting power in the word of God. Alma taught us that the word of God was “more powerful … than the sword, or anything else” in changing people’s hearts (Alma 31:5).

We must not forget that the Lord Himself provided the Book of Mormon as His chief witness.

The Book of Mormon is filled with references to the kindness of the Savior and has great power to allow the Holy Ghost to give us assurance that the Lord is reaching out to all of us.

Photograph by Jed A. Clark

Posted by Delirious at 2:02 PM No comments:

“Men and women who turn their lives over to God will discover that He can make a lot more out of their lives than they can. He can deepen their joys, expand their vision, quicken their minds, strengthen their muscles, lift their spirits, multiply their blessings, increase their opportunities, comfort their soals, and pour out peace.”
― Ezra Taft Benson
Posted by Delirious at 2:36 PM No comments:

I ran across a great story by Elder M. Russell Ballard. He said, “Oftentimes we are like the young merchant from Boston, who in 1849, as the story goes, was caught up in the fervor of the California gold rush. He sold all of his possessions to seek his fortune in the California rivers, which he was told were filled with gold nuggets so big that one could hardly carry them.
Day after endless day, the young man dipped his pan into the river and came up empty. His only reward was a growing pile of rocks. Discouraged and broke, he was ready to quit until one day an old, experienced prospector said to him, “That’s quite a pile of rocks you are getting there, my boy.”

Walking over to the pile of rocks, the old prospector said, “Oh, there is gold all right. You just have to know where to find it.” He picked two rocks up in his hands and crashed them together. One of the rocks split open, revealing several flecks of gold sparkling in the sunlight.

Noticing a bulging leather pouch fastened to the prospector’s waist, the young man said, “I’m looking for nuggets like the ones in your pouch, not just tiny flecks.”

The old prospector extended his pouch toward the young man, who looked inside, expecting to see several large nuggets. He was stunned to see that the pouch was filled with thousands of flecks of gold.

The old prospector said, “Son, it seems to me you are so busy looking for large nuggets that you’re missing filling your pouch with these precious flecks of gold. The patient accumulation of these little flecks has brought me great wealth.”

Similarly, I believe that we don’t fill our spiritual cup with one big splash of inspiration, but we fill it drip by drip with daily prayer and scripture study. It takes longer, but the cup does get filled. But if we go for a period of time without filling our cup, it can evaporate and dry up. It takes those constant drips of spiritual nourishment to keep our cup full. In the same way, I don’t think most people get a testimony by one huge earthshaking answer to prayers. I think it is more of an accumulation of thoughts and feelings, prayer and scripture study that grows that testimony in us day by day.
Posted by Delirious at 8:12 PM No comments: